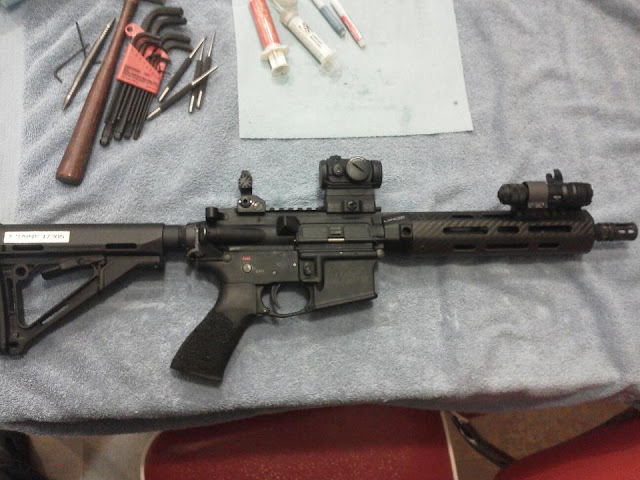 A patrol rifle is in my opinion a critical tool in the modern police officers tool box.  It gives officers much greater range to deliver accurate and controlled fire when needed.  This gives officers much greater opportunity to find adequate cover for the situation.  In the environment that I work (suburban) most distances are a house or two away so the typical distance is 30-50 yards.  With and handgun under perfect conditions and what not, could I make a head shot if needed?  I have done it on targets at the range but they were not shooting back and such so, would I be willing to bet my life or a fellow officers life on a handgun shot at that distance.  Not unless it was my only option.  Now with a rifle, that’s a much easier shot.  At that range you can even select which portion of the head you want to target.

My personal patrol rifle has evolved from a department issued Colt 6920 (a great weapon) to a Noveske 10.5 Short Barreled Rifle with Aimpoint micro and not too many other gadgets.  I do have a weapon light.  Currently I have been on a massive weight loss kick for my rifle.  With weapon light and optics I have it down to 6.5 lbs.  Now this is after having it a nearly 9 lbs. with Trijcon optics massive weapon light, forend grip hydration pack, just kidding no hydration pack.  But after having it strapped to my chest for hours at a time on SWAT callouts I decided to lighten it up.  I spent lots of money buying fitting and replacing with even lighter items to get my weapon as light as possible.

However I recently took a major departure from my weight loss kick on my rifle.  During basic SWAT school and more so in HRT (Hostage Rescue Tactics) school we did lots and lots of live fire in different shoot houses.  It was there that I really felt the teeth loosening, bone shattering blast of a 10” rifle.  I remember in one scenario I was slicing a door way on a “Slow and deliberate” search and had to engage a threat into the room.  As I shot into the room my team that was stacked up to my right was getting blasted by the concussion.  Now it’s not quite as bad but it’s close to a DD (Diversionary Device) going off in their face.  Now I’m not looking to upset their OODA loop but the reality is with a blast that prominent you may be jacking up your team and momentarily putting them in a reboot or flinch. 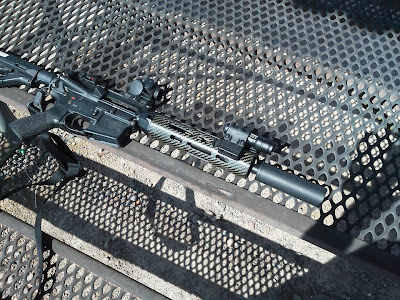 So with this I decided to acquire a suppressor for my weapon.  The choices are abundant.  I was looking for the best performance in the smallest package I could find.  Weight was not my first priority but length and noise reduction were.  I settled on The HTG Eureka.  Its 4.5 in in overall length and that is noticeably shorter than most of the competition in the 28db reduction range.  I found a dealer SEDNAtek and placed my order.  If any of you have any class III needs Rob at SEDNAtek is who you should contact.  He is knowledgeable and very helpful and has a keen understanding of LE needs.  He contacted the ATF on my behalf and explained the LE use this was for and the ATF expedited my form and I got my tax stamp in an exceptionally short time. 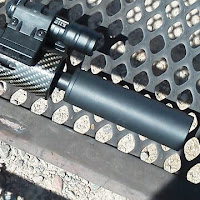 I have to be honest, I was blown away at how much it cut the noise and flash down.  With a standard A2 flash hider my rifle is a fire belching boom stick.  To say its LOUD is an understatement.  I cannot even imagine how much pain my ears would feel firing it with unprotected ears.  However with the Eureka attached I can shoot it without any hearing protection without any discomfort.  I do not have any empirical scientific data to support how much reduction there is, I will use my favorite Napoleon Dynamite unit of measure, it’s a butt load of sound reduction.  The massive fire ball that is even visible during the day time is gone.  It’s pretty amazing.   Now factor in that when it’s threaded on it only adds about 2.5 inches of length to the weapon over an existing flash hider.  AMAZING!!

I put it on my 18” barreled SPR precession rifle and with hearing protection on I could hear the bullet hitting a steel plate at 300 yards louder than the report of the weapon.  And suddenly I have this nasty thwangy spring sound I have never heard before that is louder than the report of the weapon.  I guess the boom is normally so loud you can’t hear the recoil spring and buffer moving.  Now I can.  I guess the longer the barrel the better the results.  But even with my shorty it’s fantastic.

I put about 300 rounds through it and was surprised how much change there was to my zero.  I’m a firm believer in rechecking zero after ANY changes to the weapon.  Just because you never know.

Do suppressors have a place on a patrol rifle or entry weapon?  In my opinion unequivocally yes.  The weight penalty well worth the reward.