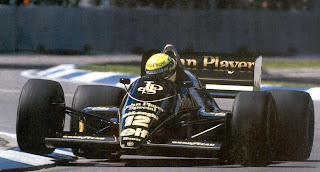 I am often asked by people who know that I am a police officer how I deal with the danger and the horrid things the real world has to bring.  It’s hard to explain how you can watch a stranger die in pain and anguish or deal first hand with the ills of society that nobody else wants to.  You just do it, partly because, it needs to be done and partly because you have become used to it.   Somehow, you learn to switch off concern for danger and get on with the task at hand.

One of the best examples I have ever seen of this was displayed on September 28, 1990. Martin Donnelly was driving the Louts 102 Formula 1 car at the racetrack in Jerez, Spain.  As he approached turn 11 (Curva Alex Crivalli) at nearly 170 miles per hour his car left the track and in a violent manner collided with the wall causing the car to disintegrate.  Car parts and debris were strewn around the track.  At first it was hard to make out, but in the middle of the track was Martin’s limp body, still strapped to the seat portion of the car.  His legs were clearly broken and twisted in grotesque angles.  The track marshals kept their distance at first because he appeared obviously dead.  Fortunately, he wasn’t dead.  His legs were however mangled and he never raced Formula 1 again, but he was alive, barely.

The famous Brazilian driver Ayrton Senna who was in the pits getting ready to go out on track ran to the crash location.  They were not great friends, however Senna felt a need to go provide whatever help was needed.  When he arrived, he helped Dr. Sid Walkins and the rest of the medical staff attend to Martin.  Senna was seen kneeling talking to the medical staff holding Martins helmet as they performed an emergency tracheotomy right there in the middle of the track.  As soon as Martin was stabilized he was flown by helicopter in Seville, Spain for further evaluation and treatment.  Ahead of him was the painfully long road of rehabilitation.

As Senna returned to the pits, ahead of him was the qualifying session for the race.  Barely an hour after Martin’s crash Senna was putting his helmet back on, disregarding his own questions of mortality and pressed on.   Not only pressing on, but on that day, an hour after helping medical staff rescue Martin Donnelly, Senna set the track record for the fastest lap ever recorded on that track.  At the very point where Donnelly had his horrific crash, Senna at 170+ MPH was in a four wheel drift making multiple steering corrections per second over the very spot Donnelly laid apparently lifeless in the track.  If you ever choose to look up the video of that lap on YouTube, its, well, I can’t think of any words to accurately describe how amazing that lap is.  But it is worth seeing. http://www.youtube.com/watch?v=SK6RZdb-Ooo

However, whenever I think of Senna, I think of mind boggling feats of driving at places like Monaco, or Suzuka.  But I can’t help but think back to May 1, 1994. For those that don’t know who Ayrton Senna was.  He was by most accounts the most naturally talented racing driver of all time.   To the people of Brazil who lived in the depths of poverty he was the symbol of hope he was nothing short of a national hero.  To the racing world he was a three time world drivers champion who raced with a veracity and passion like nobody else.  On that day in May so long ago, he was the penultimate blow to the most devastating race weekend in Formula 1 History.  The San Marino Grand Prix held at the Imola racetrack in Italy was the darkest day in F1 history.  A horrific crash in practice left fellow Brazilian Rubens Barichello, alive, but too bruised up to race.  The next day in qualifying Austrian Driver Roland Ratenberger crashed at nearly 200 miles per hour and was killed.  Looking death in the face once again, Senna wrestled what was considered by all an inferior car onto pole position.

For the race Senna was deeply troubled by the loss of fellow driver the day before.  He questioned if he should even race.  His own team manager didn’t expect him to start the race.  The Williams FW16 he was driving was very difficult to drive.  He struggled with learning to tame the 1500 pound car with 800 horsepower that had challenging handling characteristics.  But, even though he was concerned, he got into the car that day and on lap 7 entered the turn known as Tamburello, a high speed curve.  Suddenly his car darted off track and crashed at nearly 190 miles per hour into a concrete wall killing the legend Ayrton Senna.  In his cockpit they found a furled up Austrian flag that he apparently intended to fly out of his cockpit in memory of the fallen driver Roland Ratenberger.  You see it was customary for Senna to fly a Brazilin flag when he won.  That is one thing that really connected him to the people of Brazil.  In the poorest Favalas of Brazil they felt connected with Senna when he flew the Brazilian flag on a victory.   It’s hard to imagine but it’s rumored that dozens of Senna fans committed suicide when he was killed s because they could not imagine a world without Senna.  His body was laid in state for three days in his home town of Sao Palo where millions of mourners came to pay respects.

But this day, even after all of the drama of the weekend, Senna put aside his concerns and not only went out to race, but went out to win.  I know I can never have the driving skills that Senna had.  But, I hope that I can do my job as a police officer with the same focus and dedication as Senna.  Looking the risks in the face and continuing on regardless of said risk, is heroic.  I am in awe of people like Senna and a personal friend I work with.  Senna did it on the track, But my friend was shot and injured by a suspect.  After two years of painful rehabilitation he returned to the mean streets that once tried to take his life.  It’s hard to comprehend the level of dedication it takes to keep coming back after such circumstances. I  don’t care to be a hero by anyone’s definition.  But I do hope to be counted as brave and committed as those that I have written about. 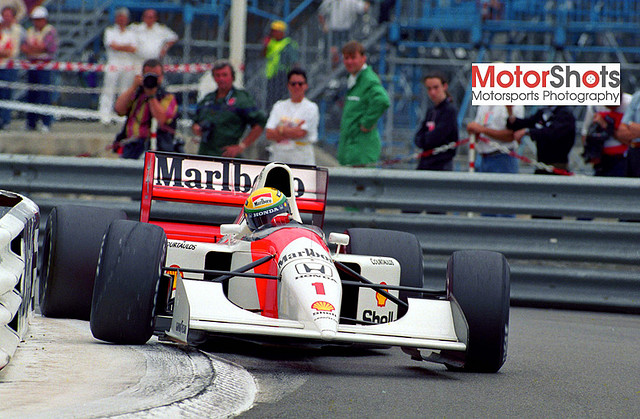