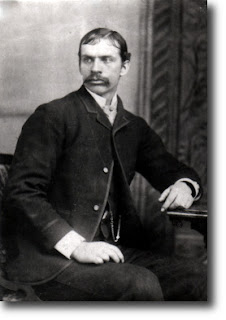 November 12th 1913 Started like any other day for Marshal Hyrum Peterson.  He was the first law enforcement officer in the dusty western town of Mesa Arizona.  At the time Mesa was a small suburb of Phoenix with just a few hundred people.  The state of Arizona was merely a year old at this time, and Arizona was still very much the “wild west” with towns such as Bisbee and Tombstone and Arizona Lawmen such as Virgil and Wyatt Earp to bolster its legend.   At 53 years of age Peterson had spent most of his years working as a farmer on ranches.  But for the last five years he was the person tasked with enforcing law and order.   He went on about his daily duty of patrolling the town on his bicycle.  But this day, November 12, 1913 would end very different for Marshal Peterson.


On this day he witnessed two subjects attempting to steal a bicycle.  He pursued them on his own bicycle and when they got to what was then the edge of town near Broadway and Country Club, the subjects fired upon him striking Marshal Peterson five times.  Twice in the arm, twice in the leg and a fatal chest wound that struck him in the heart.  He died moments later.  Marshal Hyrum Smith Peterson was the first Mesa Law Enforcement officer to die in the line of duty.   While not the official Mesa Police Department of today, Marshal Peterson was still a Mesa Arizona law enforcement officer, and all of the Mesa officers since regard him as a brother.


It would be another 81 years almost to the day when Mesa would lose the next officer killed in the line of duty.  I will get into the tragedy of Officer Steven Pollard at a later time.  Today I choose to focus on Marshal Peterson.  His murderers were caught and tired in a court of law.  They were sentenced to death by hanging, but justice never came for Marshal Peterson.  Seven years later both killers were pardoned by then Governor Thomas Edward Campbell.  Apparently he felt that the murder of a police officer was not a crime worthy of death and seven years of incarceration was enough and they were set free.  Some speculate the Governors decision was based in religious bias, others a political stunt, but nobody really knows for sure.  One thing is true, thousands of worthy souls have stepped up to the cause and carried the torch that metaphorically dropped to the ground when Marshal Peterson fell dead.  Tens of thousands of times since then men and women all around this country have stepped up and taken on the risk of dying an inglorious death to carry that torch.  One hundred and forty times this year so far men and women have stepped up to carry on where their fallen brothers fell.  I challenge you to attend the funeral of the next officer in your area that gets killed in the line of duty.  You will be welcomed, room will be made for you.  Watch their brothers and sisters grieve as the last radio call is put out and the fallen officer never responds back.  Watch the family members shutter as the tears roll down their face during the twenty one gun salute.  That my friends is the price that some pay to keep you safe.